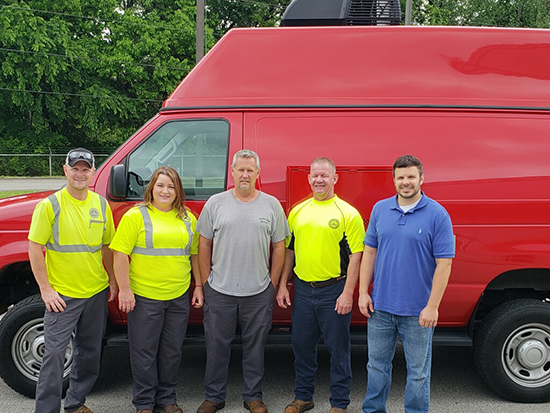 Jonathan Parker joined the City of Frankfort water and sewer department in 2008. Frankfort, Kentucky’s state capital, lays over 15 square miles, and is bisected by the Kentucky River. A population of over 25,000 people call it home. Frankfort Sewer Department’s camera truck fleet consists of two trucks, with Jonathan serving as the department’s primary IT support. The department relies heavily on outside contractors to help diagnose and repair its wastewater infrastructure.

“We only have a few personnel,” said Jonathan, “so we might have to [run cameras through the pipes of] a neighborhood, then contract with an engineering firm to do a high-level analysis.” Because the department uses POSM Server to organize its investigation footage, “We can select all the records very quickly, drop them onto an external hard drive, and the contractor can come pick it up whenever they need it.”

Though Jonathan joined city of Frankfort with the title of GIS Specialist, his day-to-day reality quickly shifted to what he estimates as 85% IT support. “I started out at city hall, but that changed fast. Now I occasionally help other departments, but mostly I’m at the wastewater treatment plant. There’s several special projects here with us being a service utility, and having paying customers, plus we’re under a consent judgement with the Kentucky Division of Water. There’s a lot of demand.” His primary responsibility as support for the team includes “making sure everything from the Cisco switches to ensuring the web-map on a phone is working. Anything they need, from tablets to cell phones to software updates, I’ve got covered.”

“We can select all the records very quickly, drop them onto an external hard drive, and the contractor can come pick it up whenever they need it.”

Jonathan uses POSM Server every day. “The real power is in the GIS; everyone on the Frankfort team is connected to it. It’s fantastic linking POSM to GIS because it’s a direct link. Anytime one of our guys enters information, it shows up to everyone else live.” Jonathan and the team use color coding and “layers” to call out the pipes that need the most attention, and also use those tools to call out bad structure ratings.

“Our team can get to a file quicker through the GIS with POSM linked,” noted Jonathan. “That’s eliminated some of the costs of using outside engineers because we can disseminate it quickly and do the work in-house.” Jonathan credits POSM Server as the tool that makes it all happen.

Marketing screenshot of POSM Server not Related to Frankfort Projects.

He recalled his frustration with their previous software before switching to POSM in 2009. “You still had to burn it to DVD and make a copy for each person who needed access. It was a pain. POSM Server was the first I’d used where I could transfer the run directly from the truck to the server or a USB flash drive. Within a few minutes, everyone had access to it. POSM lets us upload the run into a centralized database so the trucks and GIS could sync with the information; it was leaps and bounds from what we were used to.”

When Jonathan first encountered POSM Software at an industry trade show, he recalled, “The staff was affable and down-to-earth, they were a smaller group, not one of the huge conglomerates that we don’t usually care to work with. We were impressed enough with the people and their demonstration to give it a try.”

"...leaps and bounds from what we were used to.”

Jonathan added, “POSM has never crashed on us. I almost never have to call their tech support, but when I do, they’ve addressed our issue in a timely manner.” Recently, with tech support assistance, the team upgraded to POSM 10X, the latest version.” Everyone’s been checking out the new features and thinks they’re awesome.”

Nearly a decade since the City of Frankfort transitioned to POSM Software, Jonathan says, “We love it and wouldn’t dream of using anything else.” If you’re frustrated with your current pipeline inspection software or need to get software, contact us today to request a FREE, no-obligation 60-day trial. See if you agree with Jonathan Parker and find that POSM Server is the perfect support tool you’ve been looking for.