When Jason Holmes of Eco Infrastructure Solutions (EIS) of Whitestown, Indiana, first used POSM Software eight years ago, their tech support was the first thing that impressed him, and he still considers their customer service their key competitive advantage. “Other companies would leave me waiting as long as three weeks before I could get help. Typically, I’d submit an issue to a sales person, and I had to wait for them to check in with me maybe several days later! POSM Software has dedicated phone and online tech support (staffed Mon-Fri 9 a.m.-6 p.m. EST).

“I’m not beholden to any one software company,” Jason proclaimed, “but when I talk about my personal preference, I tell my customers that I use POSM Software.”

Jason is a 12-year EIS technician, and he has over 25 years of experience in the industry. His title is “Tech Support,” but he describes his role as “a catch-all position. I’m a trainer; I operate the camera trucks and vac trucks. I repair the camera trucks and I troubleshoot the equipment as needed.”

...when I talk about my personal preference, I tell my customers that I use POSM Software. 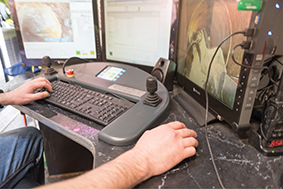 EIS partners with contractors and subcontractors to maintain and repair water and sewer infrastructure for cities, counties, and municipalities. Jason describes EIS’s territory as “90% of Indiana and 80% of Illinois.” EIS is also the exclusive territory dealer for Subsite Electronics (formerly RS Technical Services) in Indiana, and Jason is one of their sales and parts reps. Subsite specializes in closed circuit television pipeline inspection systems. POSM Software is one of several compatible systems with Subsite, and in Jason’s opinion, POSM is the hands-down best choice for pipeline inspection software.

Jason went from exclusively using a competitor’s software to trying POSM, and for the past several years, he uses POSM Software exclusively on his own systems. Jason says he loves “the easiness of it. It’s user-friendly. Simple, yet technical.” He added, “I took a new guy who’s never used the equipment or seen the software, and I had him trained on it in two days. By day three, he was out running line observation sessions.”

But ease-of-use does not mean users give up functionality. In fact, there are many advanced features exclusive to POSM Software. One major competitive edge Jason sees is the ability to customize information shown in a run summary. “You can search your run data for specific streets, days, pipe sizes, and more. That’s unique among systems. You can pick and choose what’s important to you rather than what the software considers important.”

This is incredibly useful because “you can set up count groups to only track certain observations or faults within sessions. Maybe you just want to search for root groups. You enter a search of the map and that’s all you’re going to see. The program will isolate one item out of five hundred lines, and populate the map with just that one thing. I’ve never seen another software do that. It saves a lot of time.”

You can pick and choose what’s important to you rather than what the software considers important.

Jason also added, “What excites me as a user and a dealer is that, chances are, I might get (company co-founders) Cliff or Bob Katter linking to my computer to help address an issue. Who better to do a repair than the two programmers who invented the product? Incredible.”

POSM Software is also easy to recommend, Jason says, because of its price point. “It’s the greatest value out there, and the Pro is a lifetime license that includes everything. I’ve been frustrated by other companies that like to sell a product, but hold back on functionality. Then when you ask for the option, they offer it for an add-on fee.” A purchase of POSM Pro includes all functionality and NASSCO templates.

Ease of use, incredible customization, second-to-none tech support, and a great value for the money are just a few reasons Jason recommends POSM Software over competitors. But the best way to experience POSM Software is to try it yourself. Contact POSM Support to schedule a no-obligation demonstration or to set up a FREE 60-day trial version of the software package of your choice and see what Jason is so excited about.

Eco Infrastructure Solutions (EIS) is equipped to solve most issues with maintenance or installation to your infrastructure using eco-friendly methods. With over 50 years of combined experience, they have the expertise and resources to run your job smoothly and finish on time and on budget. Learn more at ecoinfrastructure.net.